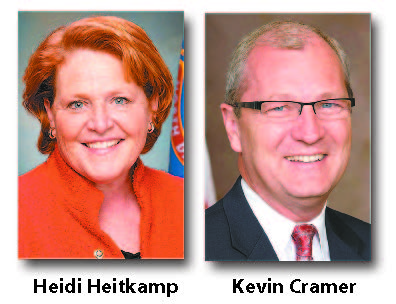 Just as the election campaign enters its final stages, NDNA will host a debate between U.S.Senate candidates Heidi Heitkamp and Kevin Cramer.

The debate is scheduled for 7 p.m. Thursday, Oct. 18 at the Bismarck Public School's Career Academy at Bismarck State College.

That's less than three weeks ahead of the Nov. 6 election, which many believe will feature the most expensive and heated campaign in North Dakota history.

Democrat Heitkamp is the incumbent, having served one term. Cramer, her Republican opponent, is giving up his seat in the U.S. House in order to challenge her.

The debate will cap the first day of the annual Witham Symposium on Excellence in Newspapers.