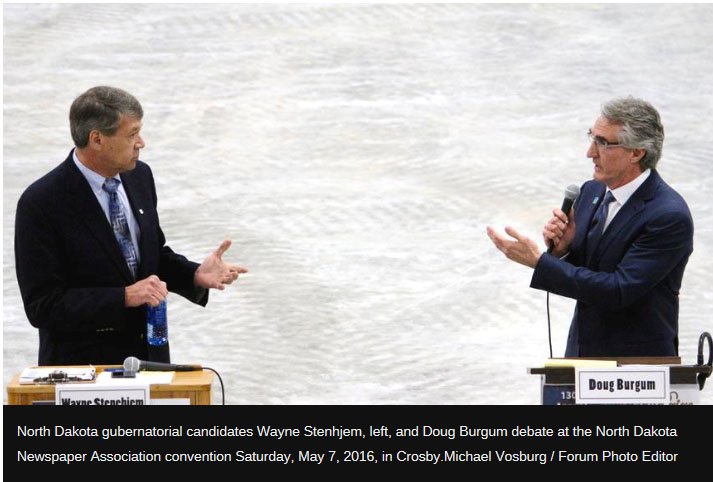 The 90-minute debate sponsored by the North Dakota Newspaper Association was mostly polite until toward the end when candidates had the opportunity to ask an opponent a question.

Doug Burgum began by pointing out that Wayne Stenehjem's salary has increased by $80,000 in his 16 years as attorney general and the agency's budget has also grown significantly.

"What is it about job you've done in the last 16 years that puts you in a position to help rein in the state spending?" asked Burgum, a Fargo businessman.

In response, Stenehjem quipped "I'm not going to work for free because I know what my time is worth," referencing Burgum's campaign pledge to not take a salary if elected governor.

Stenehjem added he helped make tough budget decisions during his 24 years in the Legislature and then as attorney general worked with legislators to improve public safety.

"People are willing to invest in public safety," Stenehjem said.

When Stenehjem got his turn, he told Burgum that the chief reason more people don't run for political office is they fear their opponent will run negative, dishonest ads against them.

"Do you know what Ronald Reagan's 11th commandment is?" Stenehjem said, referring to the adage about not speaking ill of fellow Republicans. "And are you willing to abide by it and take your campaign on the high road?"

That led to sparring back and forth between the two candidates about personal attacks in campaign advertising, which each claimed the other has made.

"For a minute, I thought a hockey game was going to break out," said Paul Sorum, also running as a Republican in the June 14 primary. "These two need to go into the penalty box."

The three debated from the hockey arena of Crosby's community center, where the North Dakota Newspaper Association was holding its annual convention.

"When you're in a small town, you use the space that's available to you," said Steve Andrist, executive director for the association.

One question posed to candidates was what they would do if they had $50 million to spend on any policy or program important to the state.

Burgum said he would use the dollars toward transforming education, engaging teachers and others on the front lines to come up with ideas and awarding innovation grants.

"This isn't about doing more of the same, it's about doing it differently and better," Burgum said.

Stenehjem said he would invest in treatment services to address a growing drug addiction epidemic.

Throughout the debate, Stenehjem emphasized his experience and the budget decisions made by the current governor and Legislature that he said have positioned the state to continue funding its priorities during the economic slowdown.

Burgum emphasized his experience as a CEO in the technology sector and said the state needs to improve its budget forecasting system to protect citizens from being hurt by budget cuts.

"Our forecast was off by billions of dollars," Burgum said.

Sorum, who called himself the only social conservative in the race, said he gets calls from people around the state who have felt the "sting of injustice" from government. He said he believes the role of government should be to prevent injustice.

"Government should work for the benefit of the people of the state," Sorum said.

All three said they would not raise taxes under any circumstances.

Burgum said he supports sending a greater share of oil tax revenue to oil-impacted communities rather than sending the money to Bismarck and "turning mayors into lobbyists."

"We should just keep the money in the communities and let them drive it," Burgum said.

Democrat Marvin Nelson of Rolla did not participate in the debate because he's uncontested in the primary. During a brief statement he made prior to the debate, Nelson called for a criminal investigation of the pipeline that leaked 3 million gallons of brine near Blacktail Creek.

"As an agricultural consultant, I see the devastation that's happened to our lands of the state and continues to happen and I just can't accept that," Nelson said.