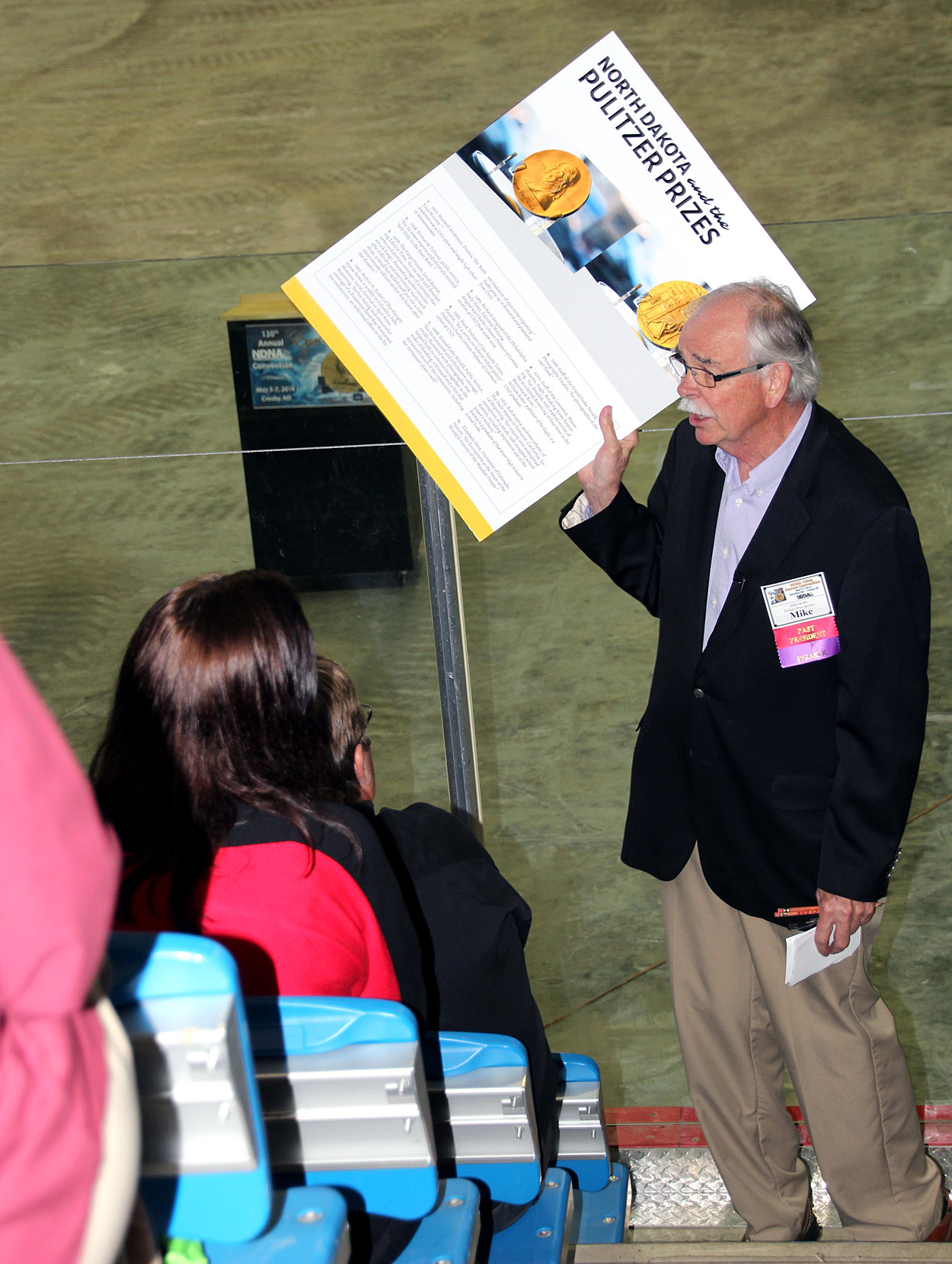 “The people in Crosby deserve reporting that loves the community but is also willing to kick it in the ass,” says Pulitzer Prize winner Jacqui Banaszynski.

Banaszynski, who won the Pulitzer in 1988 for her feature writing series, “AIDS in the Heartland,” has travelled the world while covering stories such as the Ethiopian famine, the Summer Olympics, Kurdish refuges and dogsled expeditions across Antarctica.

The former beat reporter grew up in a farm village in rural Wisconsin and keeps in touch with a childhood friend who always asks her what is beyond her hotel window. Banaszynski, who was in the south central European country of Slovenia two weeks ago, chuckles, saying her view changed from a medieval castle to rusted farm equipment beyond the Guardian Inn Motel in Crosby.

Both views matter, and both places have important stories waiting to be told.

“Stories in our own backyard matter,” Banaszynski says. “All reporting is foreign reporting, whether you’re halfway around the world or just down the street.”

And whether the audience is a reader of The Journal in Crosby or the New York Times, every reader deserves absolute courage, compassion and commitment by the reporter, according to Banaszynski.

“The real prize is the story in front of you,” she says. “Our job is to bear witness to its beating heart.”

Banaszynski was one of three Pulitzer Prize winning speakers featured at the 130th annual North Dakota Newspaper Association Convention in Crosby May 6. She holds the Knight Chair in Editing at the Missouri School of Journalism and has won multiple awards for her work as a beat and enterprise reporter and projects editor at newspapers throughout the Midwest and Pacific Northwest.

Carol Guzy, who has won four Pulitzers for photography while working for the Miami Herald and Washington Post (most recently covering the 2011 earthquake in Haiti), gave a presentation as well.

NDNA members gathered in the Dakota Theatre for Guzy’s talk and picture montage were moved, nearly universally, to tears.

Mike Jacobs, former editor and publisher of the Grand Forks Herald, also spoke about his experiences guiding the paper’s coverage of the 1997 flood and the paper’s 1998 Pulitzer Prize for Public Service due to that coverage.

Jacobs, a Stanley native, tells the story of driving home to Stanley to show the Pulitzer to his mother and pulling off the road by Towner – overcome with joy – to take a moment of private celebration for the newspaper’s survival and coverage of the flood. When he arrived at his mother’s house, she said, “You’re late, and the rolls are cold.”

Jacobs chuckles and says, “I had got so full of myself. I had transgressed.”

He admits that the Pulitzer was the gift of the river, and echoes Banaszynski’s sentiment that the story was right there, and all the Herald staff needed to do was cover it.

“The water came over the dike,” he humbly says. “That is why we won a Pulitzer.”

But as Jacobs tells the story of their evacuation and setting up shop in Thompson and Manvel, while collaborating with the St. Paul Pioneer Press to get the paper out, his experience echoes Banaszynski’s reflections on courage, compassion and commitment. From headlines of “Come Hell and High Water” to the story of the anonymous donor – the angel who donated $30 million with the provision that $2,000 each be donated to every head of household in Grand Forks, Jacobs and his staff “stuck it out” and continued to get the stories out.

Jacobs drove from Thompson each day into Grand Forks where he would walk and talk to people in advance of writing the next day’s editorial.

“It helped me to talk in the editorials in a deeply personal kind of way,” he says. “Everyone was a victim. Everyone was affected. It was a community catastrophe.”

Jacobs also reflects on the newspaper’s difficult decision to out the anonymous donor Joan Kroc, the widow of the founder of McDonalds, and the fallout.

“All hell broke loose. We betrayed a trust. We spat in the face of the woman who gave us $30 million,” he says.

But her high profile visit to Grand Forks got residents’ notice, as well as that of the newspaper.

“She flew into Grand Forks in a Learjet. This attracted some attention,” Jacobs says. “She should have driven in a beat-up pickup truck with a gun rack.”

Clues aside, Jacobs says outing the angel was a matter of business integrity and honoring readers’ faith in the newspaper. “Our business promise was to provide timely, accurate information,” he says.

If the paper had chosen to honor the donor’s request to remain anonymous, their readers would have “no reason to trust us for a daily newspaper,” Jacobs says.

Banaszynski says a reporter’s purpose is to serve the community, to not just entertain the reader with a story, but also to enlighten and engage the reader.

“Every reader matters,” she says. “I learned to be curious not for my sake but for the sake of the readers.”

Her favorite story about a father and son war veteran never won an award, but speaks to her belief that “the more intimate the story, the more universal it is.”

Her investigative, community reporting once led her to interview a Vietnam War veteran who was estranged from his father, a World War II veteran. Both agreed to speak with her separately, although they had never shared their war stories with each other. As Banaszynski interviewed each of them, she learned their war experiences were eerily similar. Both served in long-range reconnaissance and engaged in a deadly firefight, which left only them and one other fellow soldier alive. They both carried a fragile and worn letter in their top left hand pockets from women they loved and would go off alone to read that letter in a quiet moment every day they were at war.

Banaszynski wrote the story and called the son a week after it was published to check in. He was having dinner with his father when she called.

“We too are first responders,” says Banaszynski of journalists. “I can’t encounter stories like this and not care. If we recognize the sameness, we can put down some of our disagreements and move forward together.”